There are many different ideas and approaches for doing QA testing, many of which depend on what project management style you’re using, the developers on the team, and if you have a QA/functional testing team. However, this is how I’ve found it to be successful, based on my observations working on the CREST team at Virginia Tech.

First, a few assumptions on how we run things…

1. A Branch per Story

Our development process is sticking as closely to Scrum practices as possible. We have a Scrum Master, a product owner, developers, and a functional team. When the sprint is organized and starting, we spin off a new branch for each story (we’re using Git). Since we use JIRA for the sprint breakdown, the new branch is named after the story (CREST-1234).

Why do we do this? Here’s a few points…

2. A Deployment Per Branch

As will be discussed in another article, when code is pushed to the story branch, a continuous integration server (Jenkins in our case) builds the code and deploys it into our QA environment. I’ve built an application, Bacabs, that scans our QA environment and creates a dashboard with the current deployments. The dashboard displays the following: 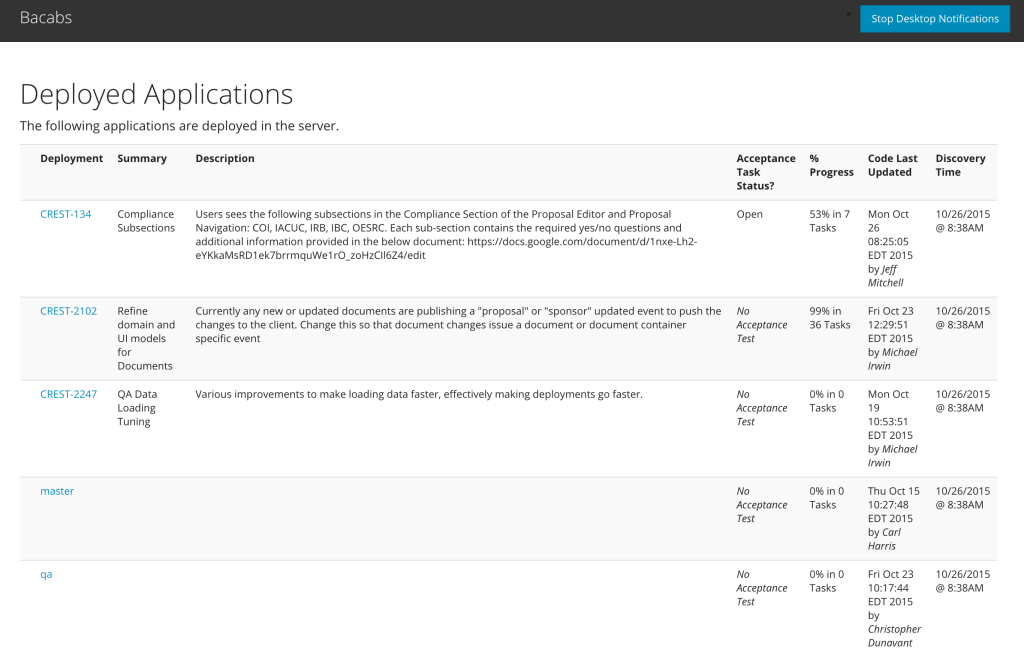 After the entire story has been marked as completed in JIRA, the dashboard displays the story with lines through the text, indicating that it is completely finished and can be (if not done already) merged into QA. The dashboard currently does not look to see if a particular story has already been merged.

The dashboard application polls the QA environment every 30 seconds (by default) and publishes updates through a WebSocket to any connected users. If desktop notifications are enabled, notifications are presented when a deployment is removed or added.

3. Merge only after Testing

As a note, we move a story into acceptance testing only when the following have been met: