This post is not intended to slam any single individual, entity, or organization. It's merely an observation/rant/informational post. I, too, have fallen victim to this idea in the past.

The other day, I was reading through Hacker News and saw a comment that said…

The container engine takes the place of the hypervisor.

While I obviously shouldn’t put a lot of weight into this one comment, I get this question all the time as I’m doing “Docker 101” presentations. So, it’s obviously something that’s confusing people. What makes it harder is this image that I see everywhere (and I use to use in my own presentations)… 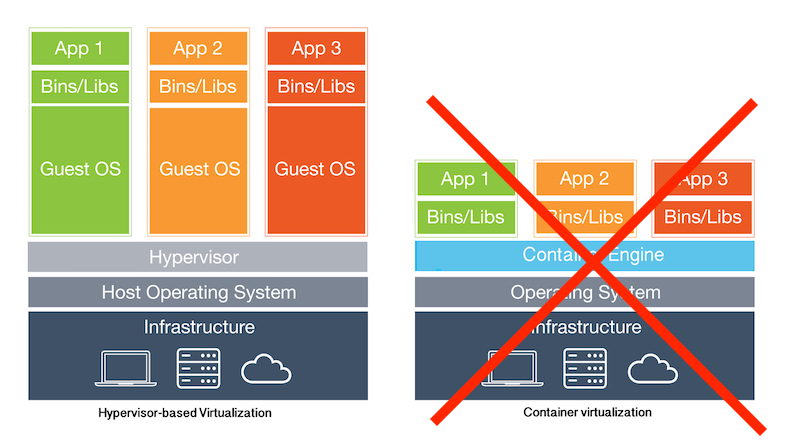 What’s wrong with this image?

This graphic gives the impression that the “Container Engine” is in the execution path for code, as if it “takes the place” of the hypervisor and does some sort of translation. But, apps DO NOT sit “on top” of the container engine.

Even Docker itself has used a slight variant of this image in a few blog posts (1 and 2). So, it’s easy to get confused.

Personally, I think the graphic should look something more like this…

It’s tough learning new stuff! But, it’s harder to understand something new when the picture you’re painting for yourself is wrong. So, let’s all try to do a better job and help paint the correct picture from the start.

There are some fantastic articles and resources out there to really learn what’s going on under the hood! Here are just a few of my favorite…