“You build it, you run it.”
- Werner Voegls, CTO at Amazon Web Services

At Virginia Tech, running a Containers-as-a-Service (CaaS) platform is tough because of the spread of users. Even within our Central IT organization, we have many departments, who almost all act as individual business entities, rather than a single entity with separate parts. That doesn’t even include the other departments and colleges distributed around the university. So, instead of having a centralized ops unit that will run all apps, we are seeking to provide a centralized container hosting platform where we can give as much control back to individual teams as possible. Obviously, this comes with some complexity.

Goals for the Container Service

We decided to leverage repos to keep track of the stacks in the cluster. These repos are small and contain only a single docker-stack.yml file. Why?

The Deployment Process, Round One

Our first attempt of the deployment process looked something like this… 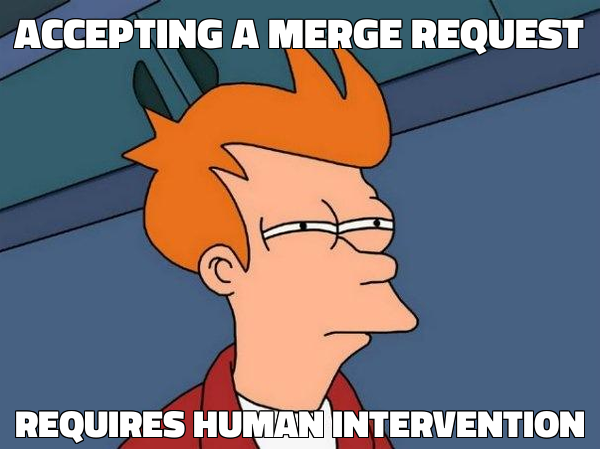 Right you are Fry!

We spent some time thinking about when a human actually needs to be involved. If a team is only updating the image (pushing an update), why should the CaaS team need to sign off on that? We decided they shouldn’t need to. Teams should be able to update their own app. If they’re changing volumes, resource constraints, etc., then it makes sense to have a pair of eyes verify the request.

Back in December, I prototyped the ability to use a webhook that receives notifications of merge requests. It “validates” the merge request and, if valid, auto-merges the request. The first prototype merely looked at the diff patch made available in the GitLab MR API. While simple, it proved the point. We can do it.

Over the past week, I built the our Stack Auto Merging bot, simply named SAM. This bot is a more production-ready version of the prototype we tried earlier. And… it’s open source on GitHub. So… say hi to SAM! 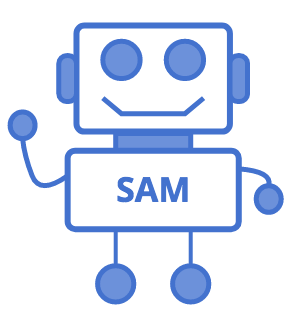 I’ll write more about SAM in a follow-up post, but what SAM allows us to do is simplify the deployment process. Changes to the process are bolded…

With this… dev teams can deploy updates to their services without getting ops involved at all. We’re incredibly excited about this and hope you are too!

What about Docker EE?

I’m glad you asked! We are proud Docker EE customers. While they have a great RBAC scheme in place, it still isn’t quite granular enough for what we need. Ideally, we’d like to give teams the ability to manage their services, but like mentioned above, limit the changes they can make. Some examples include:

Despite this, we’re still planning to give access to teams to use UCP to see their services, use the container console for debugging, etc. They just can’t make changes via the UCP interface at this time.

By leveraging git repos for stack files, we maintain the ability to audit what’s running in the cluster at any point of time. Any changes to the master branch triggers updates to be deployed. By utilizing merge requests, teams can request changes. If the change is simple, our SAM bot auto-accepts the merge request. Then, the CaaS team only needs to be involved for requests they should be involved with.

To learn more about SAM, check out the GitHub repo here or stay tuned for a more in-depth bost about SAM!

Have any questions? Great! Feel free to reach out! While we’re happy with what we’ve landed on, it doesn’t mean we can’t make it better. We haven’t seen a lot of people writing about this journey yet, so we figured we’d write about what we’ve done and start the conversation.