We all understand the importance of authentication and verifying a user before performing actions on a system. We won’t let Alice transfer funds from Bob’s bank account. We won’t let Bob create an account using Alice’s email address without verifying first (at least most systems verify). BUT… we’ll let Alice make commits for Bob. Wait, what?!?

A tad bit of background…

Without getting into nitty-gritty details (as I don’t know all about Git internals), let’s take a look at a commit. The git log output shows us a few pieces:

With this, we see the commit hash, the author, date of the commit, and the commit message. When I make a commit, the author is set using the machine’s configured defaults. Take a look at your ~/.gitconfig file to see the current settings:

Let’s fake it up!

Looking at how things are configured, there’s literally nothing preventing me from faking that and putting someone else’s information in. So, let’s swap this out to make it look like I’m Phil Estes (yes… I got permission to spoof him). To make things more realistic, look at recent commits he’s made to get the correct name and email address (as most developers have several email addresses).

Now, when I make a commit (for example, to add a Dockerfile), I now get git log output like this!

So, it looks like Phil made the commit, but it was really me. Let’s go ahead and push this to GitHub and see what we get! Does it link to his profile? 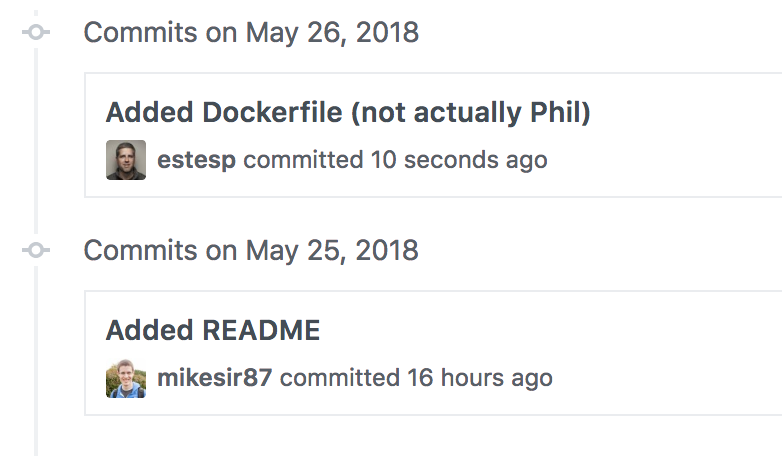 Look at that! GitHub thinks it’s Phil. It links to his account and, as such, anyone else looking at the commits won’t have any way to know it wasn’t him!

You can check out the repo here.

In this case, I’ve made it pretty obvious that this commit was not actually by Phil. But, not all others may be as forthcoming. What’s to prevent someone from using social engineering to exploit other people and projects? Some possible scenarios:

Overall, this loose metadata makes it really easy to lower the trust of others that commits were made by who is actually indicated. And really, there’s no way to really know to untangle the mess other than trusting individuals.

How to prevent this?

Obviously, the right answer is to sign your commits! By signing your commits, a GPG signature is attached to your commit! Then, if you trust the key is actually owned by the user and assume the user’s private key hasn’t been compromised, you can actually verify the author of the commit. I won’t reiterate how to setup GPG keys, but here are a few good articles:

Once you have your key, run the following to finish things up:

If you add the --show-signature option when viewing the log, you’ll see more details now!

If you associate your GPG key in GitHub, then all commit messages that are signed by you will get the cool “Verified” badge on it.

Is this good enough?

Great question! Right now, GitHub and GitLab only display a badge if the commit is signed. If it’s signed by a key configured in the user’s settings, it’s marked “Verified.” If signed by any other key, it’s “Unverified.” What about unsigned commits?

It would be nice to know, just by looking at someone’s profile if they have a key configured. That way, I can know immediately that the user has a key and I should question things if I see a commit that isn’t signed. Sure, an unsigned commit doesn’t mean it wasn’t them, but I should at least check in.

In addition, it would be nice to hover over and get the fingerprints of the configured keys. They are public keys after all!

Keybase helps a ton with this, but not everyone has it connected and publicly displayed. Having GitHub do it by default both makes sense and should be an easy win.

Just as there is a “Verified” or “Unverified” badge when a commit is signed, there should be a “Unsigned” badge when the user has a signing key associated. Again, this doesn’t necessarily mean something is wrong (maybe they left their YubiKey somewhere), but it raises awareness.

I recognize that this will probably require more work on the part of code repo services, as a lookup has to occur if a user has a key for each commit, rather than responding to the presence of a signature. But, I think it’s worth it. :)

Don’t let Alice fake your commits by signing your commits! With a few adjustments to the largest GitHub and GitLab, we can help users better know if signing is expected and recognize when things aren’t quite right.