NOTE: I've written a new post that updates this post with a better implementation. However, the information here is still valid on why you want to run Traefik on worker nodes. So, read this post first and jump over to the new one.

Traefik (traefik.io) is a fantastic tool and one I've used on many projects. It just works really well and is easy to configure. In Docker mode, it listens to events and automatically reconfigures itself to allow traffic to be sent to new services and/or containers. Deploying a microserviced application is a breeze.

However, in order for it to listen, you often see Docker Compose files looking like this…

While this works just fine when running locally, it's a terrible idea when running it in a Swarm cluster. Why? In order to hear Swarm events, Traefik has to have access to a manager node (which means a placement constraint to ensure this). This means all of your cluster traffic will run through a manager node!

Per the man page, "socat is a command line based utility that establishes two bidirectional byte streams and transfers data between them." Using this utility, we can "upgrade" the Docker socket (a Unix socket) to a TCP socket. Then, services can connect to the Docker socket using plain TCP from remote locations.

If we run socat in a container that has the Docker socket mounted, we can make the Docker socket available to any other containers on the same network. If you're using Docker EE, you can further secure the network by limiting who can access it by putting it into its own collection.

Why use socat rather than just enabling remote connections on the engine socket? Great question! By doing this, we can leverage Swarm's DNS-based service discovery (don't have to lookup where the managers are located) and we can use network isolation to limit who can access it.

The following stack file will add the socat service and update Traefik to use the new service for its Docker endpoint.

A couple of things to note…

Now that we have the proxy stack, let's deploy a simple app. We'll use the ridiculous mikesir87/cats image.

To try it out, we'll sping up a quick Swarm cluster using Play with Docker.

Wait for everything and then open badge for port 80. You should see some cats now! 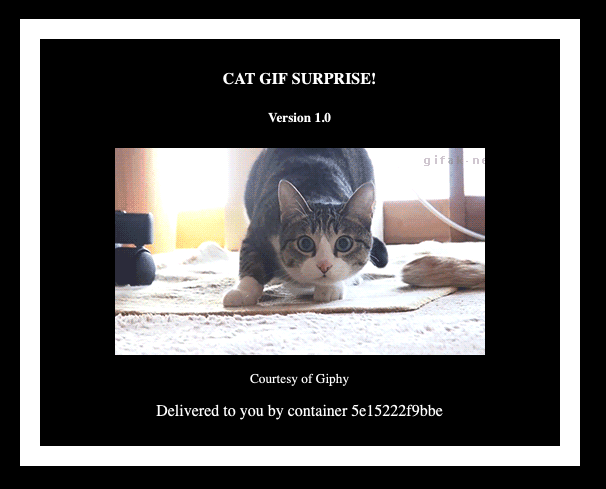 For kicks, you can also run this command to get a quick swarm visualizer:

(Yes… this runs on a manager node because I don't have it configurable to connect to a TCP socket yet. Doh!)

Wait for that to launch, and open the badge for port 3000 and you should see the Swarm with only the visualizer and socat on the manager node, with everything else on worker nodes, including Traefik! 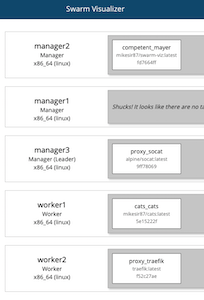 While this works, there are a few obvious next steps to explore. Have any others to add? Feel free to comment and ask below.