I recently wanted to test how two containers would interact when running in a single task definition in ECS using awsvpc mode, but on my own machine (more details on that below). What makes that tricky is that, on ECS in awsvpc mode, all of the containers in the same task definition share the same network namespace. So, how do you do that locally? This same dilemma exists if you want to mock internal pod communication in Kubernetes (shared namesapces again).

But first… what am I talking about?

And just to fully clarify, we're talking about Linux namespaces here, not any other sort of administrative namespaces (like those seen in Kubernetes).

Containers can share the same network namespace. A few things to know/clarify:

As mentioned earlier, shared network namespaces are used when:

Using the network flag when starting a container, we can either put a container on a network (normal usage) or change the "network stack" (aka… namespace). For example…

Pretty cool, huh? What happened? When we specify --network=container:[name|id], our new container will share the network namespace for the specified container.

We can do this same thing with Docker Compose! Here, you use network_mode, instead of network.

One additional feature is the ability to use the service name when specifying the setting - service:[service-name]. Be sure not to include an accidental space after the colon, as it looks like Compose isn't trimming the service name.

Yes, this a "stupid" example here, but it gets the point across. You can try this out and you'll see the curl request succeed.

My use case - Auth Sidecar

So, back to my original reasoning to go on this journey… I have a fairly simple Node application that we want to add CAS support (think single sign-on) to allow only certain users to access the app. However, there is no official Node CAS client and we'd rather not 1) use someone else's or 2) write our own. Since Apache has an officially supported module, we decided to create a small Apache container, install the mod_auth_cas, and then proxy all traffic to the underlying application. So, traffic looks something like this… 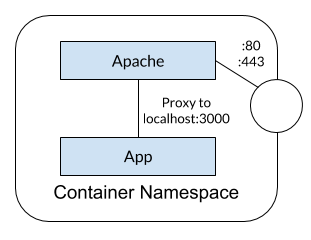 When deploying to ECS, we would create a single task definition with both containers (which puts them into the same namespace) and the proxing configuration is easy as it's just to localhost (no service registry/lookup, etc.). With this, we have effectively created a sidecar for authentication and authorization for our app. Cool, huh?

Got other ideas or input? Share them in the comments below!