At Virginia Tech, I work on a product called Summit, which is a tool to help manage the process around sponsored research (validating compliance, building budgets, obtaining approvals from colleges/departments, and more). And, we've been doing some pretty cool stuff with Docker App and it has completely changed our development environments. But, first… some background.

Summit is composed of many components, most of which are different front-end clients to serve various purposes or audiences. Here's the breakdown… 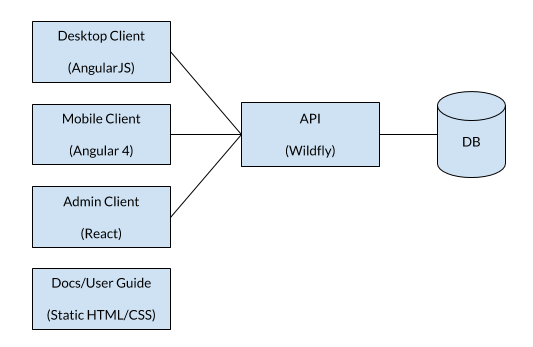 With all of these components, we built a single docker-compose.yml file that is using the latest image for each service. It's kept up-to-date using automated pipelines and is done on a per-feature-branch capability. This makes it easy to switch all components when changing feature branches. The automation setup will be the topic for (another blog post)[/2019/03/keeping-docker-app-updated/]. (nice teaser, huh?)

With this, if any developer on our team were to push an update to the API, the compose file is updated to have the api service use the new image (we tag images using git commit hashes). The Docker App is then published.

What this means is I can simply run docker-app deploy our-registry/summit.dockerapp:master and the latest images for each service will be deployed locally on my machine. We added Traefik as a reverse proxy for host-based routing (each service has its own hostname) and boom! Summit-in-a-Box!

With Docker App, a service can define an optional x-enabled attribute. When set to anything "falsey", that service is completely ignored when deploying or rendering the Compose file. Docker App also let's us use settings (being renamed to parameters) to allow a value to be changed. Let's extend the example from before to add the attributes…

And then set the default values for the settings:

Now, with my updated docker app, I can override the setting values (using -s [var name]=[value]) to selectively disable services. Running this command:

Swapping in Another Container

Even though the desktop service is not included in our Summit-in-a-Box deploy, there's nothing stopping us from running another container in its place! In the repository for our desktop client component, we might have a compose file that looks something like this:

A couple of things to note about this…

Now, if I run docker-compose up in the desktop repo, I'll start this dev-ready container, yet hook into the application stack coming from Docker App. Cool, huh?

By adopting and taking advantage of Docker App, we're able keep our environments even more consistent by doing the following:

We've made tools to help with #3 and #4, which will have its own blog post soon too! In the mean time, feel free to look at DevDock.